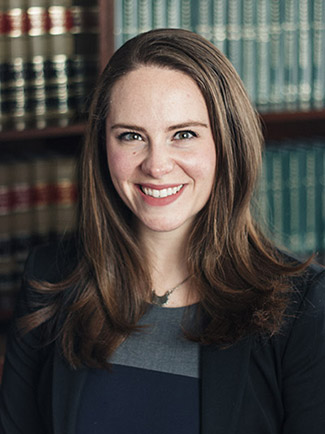 Gabriella H. Grosso is an associate in the Collections, Civil Litigation, and Worker’s Compensation groups of Ahmad Zaffarese, LLC.

Prior to joining Ahmad Zaffarese, Gabriella worked at small firms in Philadelphia and the surrounding counties practicing family law, estate planning, estate administration, and tax planning. She received her B.A. in Political Science and Sociology from the University of Pittsburgh in 2012. She earned her J.D. from Penn State’s Dickinson School of Law in 2015.

While attending Dickinson, Ms. Grosso was President of the Women’s Law Caucus, and Auction Chair for the Public Interest Law Fund. She completed legal internships with the Law Offices of Women in Need and the Harrisburg YWCA Legal Center, where she worked closely with victims of domestic violence. She served as a student attorney in the Community Law Clinic, handling a variety of family law issues. In 2014, she was recognized by the law school student government for her commitment to diversity, and was awarded the recognition of “Public Interest Advocate” in 2015.

Outside of work, Gabriella is committed to serving the Greater Philadelphia Area through membership in the Junior League of Philadelphia. Gabriella also performs with various community theater groups, performing most recently in musical productions of “The Mystery of Edwin Drood” at Narberth Community Theater and “Shrek: The Musical” with the St. Francis Players.

Gabriella is licensed to practice law in Pennsylvania and New Jersey. She is also a member of the Philadelphia and Delaware County Bar Associations.